Barbara’s note: Although I haven’t formally advertised it yet, I am now a Dedicated Level 1 Quantum Healing Hypnosis Therapy practitioner. This is the healing past-life regression therapy technique developed and perfected by the late Dolores Cannon. I took the Level 1 course in October, 2014. I have facilitated over 30 QHHT sessions in the Greater Phoenix, Arizona area since the middle of December. Since I work with and channel the Higher Self in my healing practice, I found QHHT is a beautiful modality of the Higher Self’s ability to heal the client. In other words, the client heals themselves!

Candace Craw-Goldman has graciously given us practitioners permission to share the following true story of a miracle healing through QHHT. I want to share this story with you, because there are over 5,000 QHHT practitioners throughout the world and people are experiencing amazing healing. You can go to www.dolorescannon.com to find a QHHT practitioner near you, if you are resonating with this form of healing.

This story is important, so my hope is that you read it all the way through. But you really don’t have to if you uninterested in the details or too busy. Do yourself a favor though and just look at the two photographs below and then read the next paragraph. 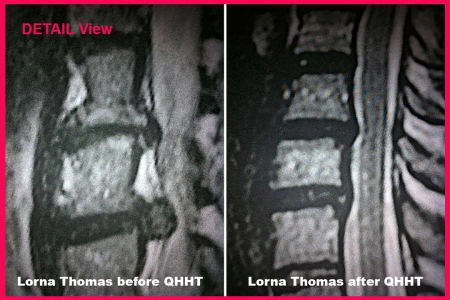 Lorna Thomas, 40, had two incredibly painful bulging discs in her neck that were pressing upon her spine. She could only remain upright for about 4 hours a day. Her neurosurgeon told her surgery was her “only” medical option for relief. After having been given that information, the very next day she had a Quantum Healing Hypnosis session facilitated by Charlotte Daniel. At the conclusion of that (approximately 2 hour) hypnosis session, Lorna Thomas was no longer in pain and was able to move her neck freely. These photographs are images of the before and after scans of her spine.

Hard to believe? Lorna’s neurosurgeon thought so as well. He looked at the older MRI and then the new one and did not even recognize Lorna as the same person in the second scan. But it was the same person. Lorna’s discs were healed and her pain was gone.

This story may be unbelievable to the neurosurgeon and maybe even to you and that’s understandable because, for the most part, our culture deems what you have just read to be medically and physically impossible. But I assure you, it is not only not impossible, but very possible, and very real. Or, perhaps this story sounds like a miracle to you. Also understandable and perhaps somewhat easier to accept what happened as a “miracle,” but the term miracle usually implies a rare or extremely unlikely event, and usually with a religious connotation. But the interesting thing is that this type of healing is really not rare or unlikely at all. Those who practice Dolores Cannon’s method of Quantum Healing Hypnosis would tell you it is not at all unusual or even extremely rare. We see, we witness, and we also hear of these miraculous healings from other practitioners every single day from all over the world.

What is rare about this story is that real names, real dates, real facts, and real medical scans are being presented and published outside of the metaphysical community. That indeed is quite rare. Lorna Thomas and Charlotte Daniel see no need to hide this wonderful event from the world behind assumed names. They want you to know about this story and celebrate, because if this was possible for Lorna, it is possible for you and your loved ones too.

The remaining part of this article is, the rest of the story.

Lorna’s “before” scan was taken January 7, 2011. She had to wait to see the neurosurgeon until the following year due to England’s National Health Service delays, which was actually the same day she and Charlotte arrived to take the Advanced Level QHHT class from Dolores Cannon in Pewsey, England, September 13, 2012.

During that long time of waiting after her initial scan, Lorna was getting worse. Much worse. By September of 2012, she unable to rotate her head from side to side. She found it painful to use her hands for anything at all. She had trouble brushing her hair and putting on makeup. She even had trouble feeding herself without pain. She had to lie down a lot and couldn’t turn her head at all without excruciating pain.  She was really scared about how bad it was going to be before she finally got to see the neurosurgeon. She could only remain upright a handful of hours a day and even then only with heavy pain medication.

All of that was about to change.

It was the second day of the Level 2 QHHT class. At that time, Dolores had the students form groups of three in which to practice her method. Lorna found herself in a group with Charlotte Daniel and a third person by the name of James Frankland. At the beginning of each practice session the roles were switched with one person being the “hypnotist” one person being the “client” and the last person being an observer.

Charlotte had already been the “client” the day before and this time she was to be the “hypnotist”, Lorna the “client” and James the observer.

Lorna was thrilled. It was her turn to experience QHHT. She had great faith that it was possible to be completely healed during this session. She was not to be disappointed.

Lorna relates, “I loved learning QHHT at the level 1 class in Faringdon in 2011, so I just had to take the level 2 class too.  And knowing that I would get to experience a session at level 2 was really the selling point for me. I told myself that this was going to be the next best thing to getting one with Dolores herself. I wholeheartedly believed that having the session in the class would heal me.

I also could feel the energy of the house where we were practicing- it was quite electric and thick. I have to admit, as excited as I was, I was also very nervous.  I had not had a session before so I did not have any idea of what to expect. I had no preconceived ideas of how it would feel to be “under hypnosis” and I just gave myself up to the process.   I remember it being very emotional.  The “past life” that I viewed was actually quite odd – it was less like an actual life but simply an experience of being an entity that “collected information” to be delivered to others after collecting it.

What I learned in the session was that I just carried on experiencing all of these “lives” but, I didn’t always release all of the information that I was supposed to. And that proved to be at the root of the problem in my neck. I carried this information, these emotions in my neck. The physical symptoms now are a representation of my inability to learn this lesson about releasing.

After providing the understanding of the problem, my Higher Self then began to heal me. I remember the heat started coming up through my neck.  I actually found it somewhat difficult to breathe.  I was panting and filled with an immense energy, it was so intense it kept bringing my “regular” conscious mind forward because I was feeling such strong sensations. I was really and truly vibrating in my body.

I immediately felt better – I felt like a million dollars, completely renewed with endless energy. After that session, for a while, I actually hardly needed any sleep, and only slept a couple of hours a night. Dolores’ method changed my life absolutely and completely.”

As the “hypnotist” in this session Charlotte described what it was like to facilitate, “I don’t think my particular involvement was key to Lorna’s QHHT session being successful.  I believe that it was because of Lorna’s conviction that she would be healed and also, of course, the technique of getting her to the level of trance where the healing was easier for her to access and manifest.

As the being she embodied, she said she was collecting emotions and information for information purposes, possibly for a collective.  As the being, she was a part of the process to gather that information or those lessons and drop it off and go back and gather more or different emotions/lessons, as information to take back to the big whirlpool of consciousness.

When I asked Lorna’s Higher Self why was this experience shown to her today here was the reply: To show her that she’s carried this ‘collection’ work forward into her current life. She doesn’t share her problems, she collects them and works through them on her own. By not releasing them properly, she retained the pain. She just holds on too much so we had to show her how to release. Now she knows the sensations and can do this for herself. She now knows her purpose, and knows how to release problems and emotions.”

Another routine day in the world of Quantum Healing Hypnosis!

Note: Lorna and Charlotte will be joining Candace on Julia Cannon’s The Metaphysical Hour Radio Show February 20, 2015, at 7pm Central Time to talk about this story and more. After February 20 the show will be available in the archives.

Charlotte Daniel is a Dedicated Practitioner of QHHT practicing in London and Dorset, England. You can find her website HERE. Or email charlottedanielqhht@gmail.com

-For more information about QHHT and classes and Dolores Cannon’s body of work, see DoloresCannon.com

-For information about Candace and her QHHT practice see newearthjourney.com

Permission to share this article is given as long as it is shared completely with all links and remains unaltered in any way and contains this source information and copyright notice.

* The photo image at the top of this article was taken by me, Barbara Becker. It is a communication from Dolores. Driving down a road, after I left a QHHT session that I faclitated, I came upon this street sign. Here is the interpretation: The telephone pole represents communication. The sign that says “Dead End” is read backwords, “End Dead”, meaning she is not dead, as we do not die, rather we change form. The arrow pointing to the right is a message from her that she is on my right side during the sessions. This is true. I hear her voice in my right ear during the sessions.

If you live in the Greater Phoenix area and surrounding towns, and are interested in learning more about Quantum Healing Hypnosis Therapy, or would like to schedule a session, please contact Barbara Becker at: barbarabeckerhealing@gmail.com. She is also in the “Find-a-practitioner directory at www.dolorescannon.com.

Other Articles You May Enjoy...

QHHT® session story: The Ego and the Higher Self go into cahoots for an amazing experience!

Using sounds in hypnosis to your advantage

In this article I will share how we can use sounds to go deeper into ...read more

I thought it would be helpful to share what happens while a person is in ...read more